Possible Warcraft Movie **spoilers**. Enter at your own risk. 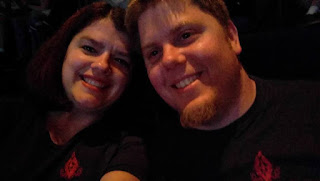 Before Breaky went to Thailand, we all went to see the Warcraft movie, knowing there were already some pretty divided reviews.

Having only played a little bit, and only started relatively recently, it was really interesting for me. I recognized names and places from either playing World of Warcraft or Hearthstone, and overall, I thought it was beautiful in it's visual execution. Many times throughout the movie, Nick would whisper to me about names that were dropped that were important to the story moving forward. After the movie, I had tons of questions about when certain characters show up and how they fit in. I was told there were books about the lore, which I may have to check out.

If I had not had the knowledge that the entire story-line continues due to years and years worth of story from the game, I think I would have been disappointed in the ending. It ended abruptly and without the main "bad guy" being "stopped." I do have to say, the final fight scene between Lothar and Blackhand at the end was really, really short. But by that time, I was ready for the movie to be over anyway. Not because I didn't enjoy it, but I have a short attention span and fight/war scenes for me can be monotonous.

I also found Lothar's inability to stand up straight a little frustrating. Someone needs a chiropractor. Stop leaning on things for heaven's sake. You can be cool and still have good posture. Honestly though, I am probably the only one who noticed.

Overall, we both really enjoyed it. With context about the ending, I was very much satisfied. The cinematics were absolutely amazing and it was a fun ride. Oscar worthy? Nah. But most of my favorite movies to actually watch aren't. I would watch this again. It even prompted me to look in to getting the books on the lore to read.
Posted by DuchessCPK at 11:00:00 AM