Ok, I know months ago I said that Halloween was my favorite holiday. But... I do enjoy Christmas quite a bit.

All people ha- their holiday traditions. Whether you celebrate Christmas, Hanukkah. Kwanza, Festivus, or nothing at all, there are things in this time of year that are standard staples in your life. It could be as simple as going out for Chinese food on Christmas Day, or staying put during the week of Christmas to avoid the crazy traffic of last-minute shoppers, or packing up the family and going to Florida for the week.

My side of the family is rich with holiday tradition. My grandfather made (MADE!) a snowman that moved his hand and tipped his top hat when you opened up their door. To my understanding, he attached the arm with the top hat to the door so when you opened it he was tipping his hat. My Dad's love of Christmas shone in the continuation of many traditions and many new ones that he created when he started his own family. One neat tradition he got from Alfred Burt was to create a Christmas Carol and include it on our Christmas card. 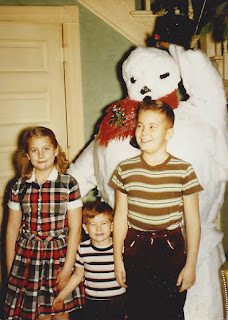 Now, having been married to Breaky for a year and a half, my traditions have evolved in to continuation of my family's traditions and new ones that were created after Breaky and I got married and got our own place. 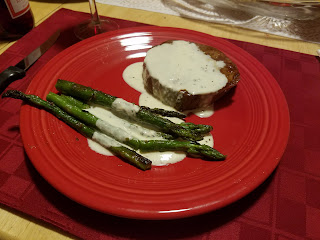 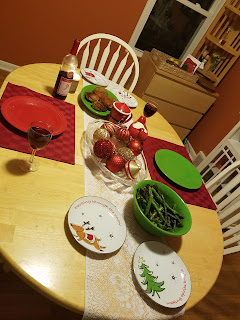 Since I started in higher education, I have been blessed with getting a few days off around the holidays. Unfortunately, this usually does not include the day before Christmas Eve (and sometimes Christmas Eve even), so usually Breaky and I are still in Kalamazoo for the day before Christmas Eve-Eve. We have now turned this into "Our Christmas" where we exchange our own gifts, put on Christmas pajamas, enjoy and great dinner and then watch some kind of Christmas movie. This year we decided that the Christmas movie was going to be Die Hard, because it IS a Christmas movie (and if you think differently, you can leave). This year also, we have the addition of our wonderful DogCPK, who bundled up in her sweater from her Nanna and helped us enjoy the wonderful evening. 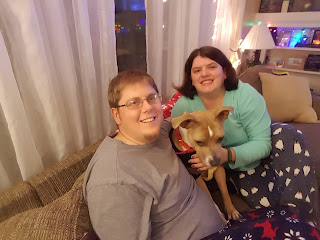 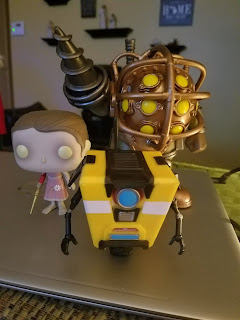 looky what BreakyCPK got me! :)
Big Daddy, a Little Sister and CLAPTRAP

Christmas Eve is spent at my parents' house in the city in which I grew up. Traditions for Christmas Eve include Mom frantically wrapping presents that she has put off doing, and filling stockings, making Norwegian Jule Kakke (Christmas bread) and watching Scrooge (1970 w/Albert Finney)

and having either hors d'oeuvres or in the case of this year, pizza, for dinner. 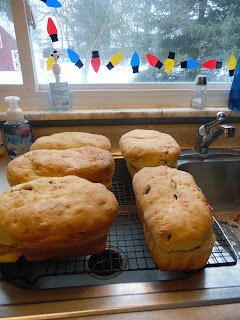 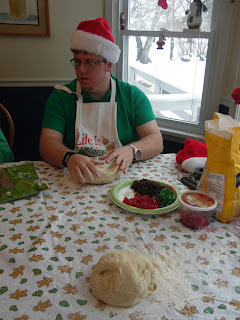 Breaky is officially a Norwegian by marriage :)

A new tradition that is now just three years old, is that early Christmas morning, Mom and I go for a Christmas morning walk around the block (which is just about one mile). Once again, we added a new member, DogCPK, who LOVES walks, or as we have to say "w" because she knows what "walk" means. 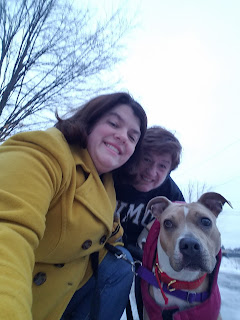 Christmas morning has evolved from having a big fancy breakfast before opening up presents to having a piece of toast and a crap-ton of coffee before opening up presents, and having a big brunch after presents. Speaking of presents, the way our family has always opened our presents was in order, one at a time, from youngest to oldest. I believe this started when we were really little, the adults wanted to see what the kids got and I imagine there is some lesson in patience and giving that occurred as a result, but in reality it was probably to stem the chaos that is wrapping paper and boxes. I did not realize this was not something everyone did, until I would watch Christmas TV specials and, to my horror, kids would be unwrapping presents all willy-nilly. The HORROR. 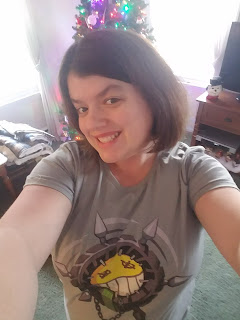 Thanks Mom! Junkrat primed and ready! MERRY CHRISTMAS. Who says Christmas can't include the Geeky side?

Anyway, presents are all unwrapped, so we enjoy a brunch which includes the Jule Kakke, scrambled eggs, toast bockwurst, coffee and freshly squeezed orange juice.

We then plug in White Christmas, and everyone takes a nap. You think I'm kidding. This was a tradition even way back when my Grandmother was still with us (bless her soul), who would take up the couch, and snore through "The Best Things Happen While You're Dancing.:"Another new tradition is that there are a few football games on the other tvs. Thanks Breaky. Mom and I will start making the beef en croute for dinner. Now Breaky helps with dinner by making his Dad's mashed potatoes.

My Dad was a teacher for 35 years before he retired a few years ago. He taught choir, and if anyone was in choir or band in high school, you know what a production it can be. We had a bunch of parents, helpers and former students who would come back and help every year. A tradition was to have that group come back to our house for snacks and drinks. When he retired, we made it a point to invite those friends and family to our house the day after Christmas for food, drink, and lots and lots of music and singing.

What are some of your Christmas traditions? Which have evolved and which have been older traditions?


Sometimes I struggle with the duality of the life I live.

I work in a very professional, educational setting in which, at the current job I work, I don't even get to wear jeans on Fridays. After work, I get home, throw on my Hufflepuff sweatpants and my favorite Princess Peach tee-shirt and throw on my gamer headphones and play the latest expansion of Hearthstone for a few hours after playing with my dog in the snow. It is hard during those moments to feel like a professional woman with a graduate degree.

What is harder is to keep that passion for video games and general geek-ness alive at work. Actually, just had to explain to an individual who works in HR what my husband does for a living, as it came up in casual conversation that my husband was in Boston for "work." Oh, so what does your husband do?"..... *sigh* "Well......"

Lately, in today's world, having subtle, yet stylish representations of video game and geek pride for women have been an increasing trend for places like ThinkGeek (full disclosure, liked them a lot more when they were not owned by Gamestop, but that's a whole other blog post that I now have written in my head), and Blizzard and other prominent producers of gamer swag.

I asked my Facebook friends if they had anything they loved to wear that was subtle, but geekish that they wore to work. I got a few awesome answers: 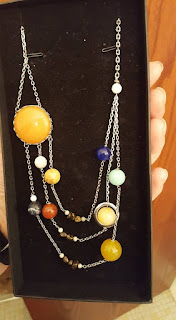 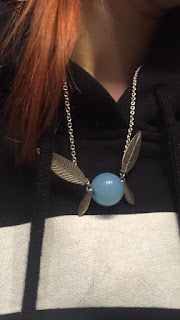 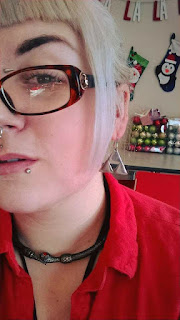 I have a few things, but definitely lacking in the subtle, yet classy representation of geek.

My favorite is probably the Hearthstone necklace I wear probably 2-3 times a week: 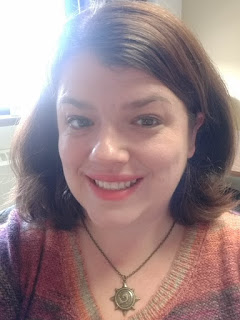 A few weeks after Blizzcon 2015 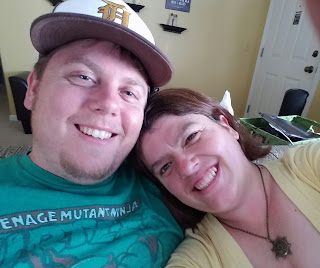 Featuring the one and only Breakycpk in 2016

I also put a Lego brick keychain on my name badge so I can put my badge with my keys: 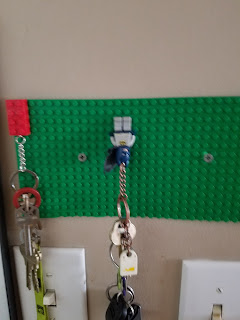 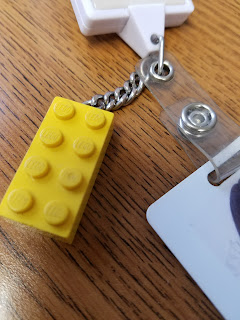 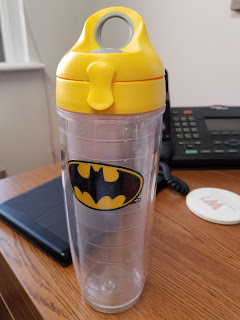 Added the yellow top recently. I think it looks better :)


These don't even include all the sports-geek side of my life, which I also kind of inherited from Breaky
What are some of your favorite subtle ways to show your geek pride at work? Do you have something at your desk? A scarf or two? Let's help each other and get more representation of geek culture in our professional lives! 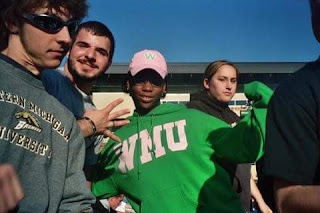 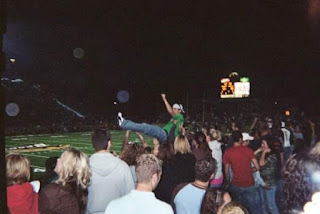 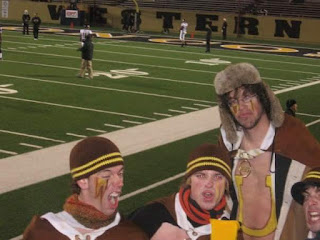 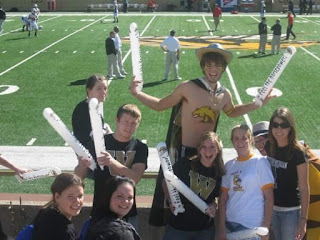 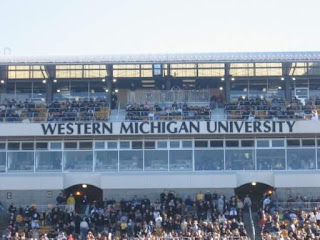 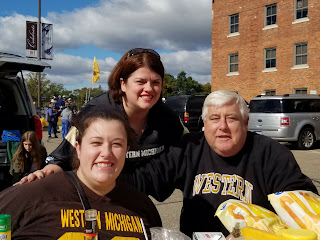 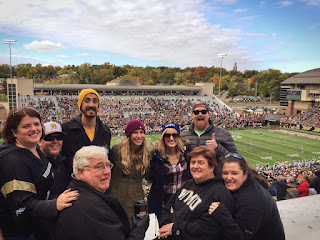 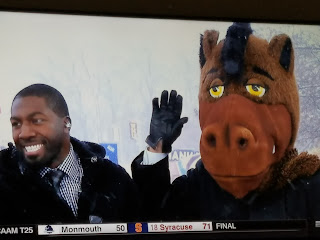 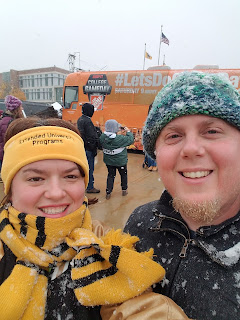