As many of you know, Breaky and I have been together for over 4 years. Before I knew Breaky, I did play games, just not with the enthusiasm and frequency as I do now. I tried World of Warcraft during a promotional free month period. I chose to only do the one month for free, because I worked at a call center, had student loans, and lived in an apartment by myself and had no money. In addition to taking advantage of free-month games that usually cost way too much, I also took advantage of ThinkGeek's promotional $5 tee shirts, back when ThinkGeek's customer service was decent and was not owned by GameStop. The promotion was you send them $5 and they send you a random tee-shirt. Usually one that was the wrong color, discontinued, or couldn't be regularly sold.

Why this information? It all ties in, I promise.

The tee-shirt I received from ThinkGeek was a navy blue shirt with the Alliance logo from World of Warcraft. This was around the time I was thinking about trying the game out anyway, so I did. Was Alliance. Got really confused and frustrated (I didn't have anyone else that played, and was shy about playing online games with others for fear of making a fool of myself), so I cancelled the free month before I got charged. I didn't dislike the game, but definitely couldn't justify the purchase of a game I couldn't see myself playing all the time.

But I kept the tee-shirt. Went about my merry way. Met Breaky (our "how we met" will be a different blog post), and when I would wear that shirt, he would get all pissy, in a joking manner. Told me he was Horde all the way, and that dating someone with an Alliance shirt was blasphemy for him, as he was ride-or-die Horde. Told me when I wasn't looking he was going to burn it, or take scissors to it. When I cut around the neck of it to make it a workout shirt, he was disappointed I wasn't destroying it just for him.

YEARS later (just kidding, probably just less than a year), the shirt, like most articles of clothing, had seen better days, so it was reduced to rags, with Breaky doing the honors.

So imagine my surprise when years later, he started playing WoW again. And with what faction? Oh, Alliance.

All of the grief I got for wearing an Alliance tee-shirt? And you end up Alliance?

"Well," Breaky explained, "it is less about Alliance vs Horde now babe! It is all about 'For Azeroth' and the people I am playing with are Alliance."

Ok, I thought, not that bad. I'll tease him about it, sure, but I won't be super mean about it.

Sure enough, at Blizzcon that year it was evident that Blizzard and the game were really pushing for a "united Azeroth" kind of thing.  Despite being Alliance, Breaky got us Horde shirts at the gift store, as well as got me a Hearthstone journal and a Hearthstone necklace.

Less than a year later, went to see the movie. Even wore our Horde tee-shirts.

Couple months later, the Legion expansion came out. Breaky, ever the socialite, organized a few chat groups to decide what faction, what server, when to play etc.... I had a few weekends here that I have been busy with family and our cabin up-north, so I decided not to join in this time.

Needless to say, emotions were high, and arguments happened. First they were going to be Alliance. Then they were Horde. Finally Breaky came back and said they were officially Alliance. I laughed to myself, and then decided to have my revenge for my poor, fallen tee-shirt. Went online when he left the room and ordered him an Alliance tee-shirt similar to the one I had. It was going to arrive in two days.

Perfect, I thought. It will be a cute surprise, we'll get a laugh out of it, blah blah blah.

That next night, driving home from our Trivia Tuesday at the bar, Breaky announced that they decided, officially, to be Horde.

My head hit the dashboard in a frustrated thunk. I think Breaky thought I was broken. He described all the drama and in-fighting and how someone made this rallying speech and someone followed someone else and that was the end of it. Horde it was.

So I explained with an exasperated sigh about the gift that was coming and how he was going to wear it anyway, because I was his wife and he owed me a little for all the grief about my old tee-shirt. He chuckled and agreed. 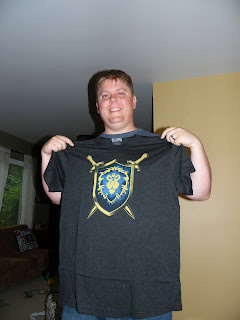 We received it the next day. Even wore it, right away. Of course, did so to be troll at work and in his WoW chat. But that's the man I married. 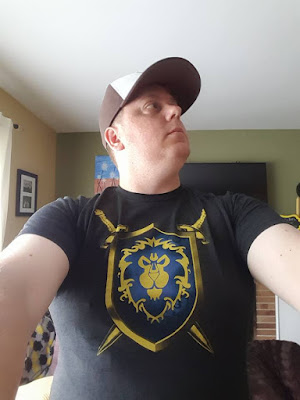