We (Breaky and me) took a little break from WoW to celebrate the new expansion from Hearthstone. "Whispers of the Old Gods" released April 26th and included brand new cards and introduced a new style of game play which retired some older cards from previous expansions, but still allowed you to play those cards in a different format called "wild."


For those that may not know what the hey-diddle-diddle I'm talking about, Hearthstone is a computer-based card strategy game. You play a "class" or a "hero" and you play cards to ultimately destroy your opponent. Some of your cards are spells that may do things like damage or healing, and other cards are "minions" that you place on the board that can do damage or protect your hero.Think Magic the Gathering on the computer,  just a little bit more playable (in my opinion, Magic just seems way too convoluted. I have a master's degree, so my brain-space is super limited now). If you haven't already, I suggest playing. The tutorial is super helpful, and its $$ FREE $$ HOLLA. You can play on your PC, phone and tablet.


So Breaky and I tried to pre-order the 50 packs. I had a crap-ton of issues trying to log on to my Hearthstone on my tablet, which is connected to Amazon. We used Amazon because of their deal on coins, which allowed us a pretty good deal to pre-order these packs. Unfortunately, I was a little too late, so I ended up buying 40 packs, then receiving 3 packs for logging in that day, and a few more for winning a few games in the new standard format. Total, I ended up with 48 packs to open with my Breaky.


Along with everyone else, I got C'Thun when I logged in to open my packs. This is C'Thun: 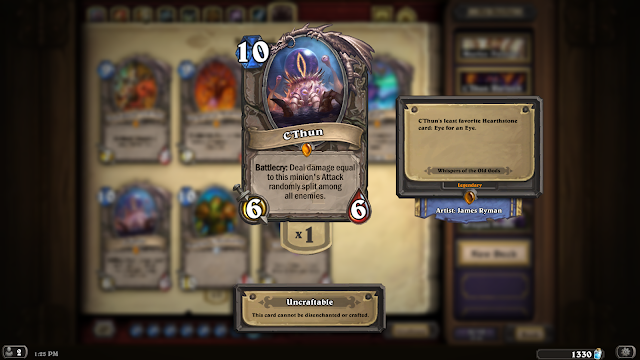 There are many cards in the expansion that increase C'Thun's attack and health.

And the husband and I argue about how to pronounce. C'Thun. According to the card's sound effects, it is Ka-Thoon. Breaky thinks it is See-Thuun.


To each their own.


Anywho, on to the opening

Couple things for newbies to Hearthstone. In order of rarity, cards with a white stone in the middle are "Common", cards with a blue stone are "Rare" cards with a purple stone are "Epic" and cards with a gold or yellow stone are "Legendary" and are usually adorned with a dragon up top. Cards that are gold are worth more and are pretty rare.


I decided to record my pack openings just in case we had something epic happen. I had a few good openings, took some additional screenshots and was able to record the cool opening animation.

This is my Golden Legendary! Hogger, Doom of Elwynn. Plus, pretty cool Priest card: Power Word: Tentacles" which gives a minion +2/+6

This is probably the best overall opening I had. No Legendary cards, but three Rare, two of which are gold and an Epic!

Then of course, there's my husband's Legendary, Yogg-Saron, which casts a random spell for each spell you've cast this game. Jealous:

I am probably most excited about my C'Thun Priest Heal Deck. I played a basic Priest Heal Deck when I was learning, and did pretty well until I was about a rank 19, then it wasn't valid anymore.