So, I decided that "Food Friday" will be the second Friday of the month, instead of every Friday. You know why? Because life happens. And I am still learning how to be an adult with responsibilities and a job.

But you still love me :) Right?

So, to give a little background that probably 85% of people will probably skip because let's be honest, you are here to read the recipe, the husband and I have a Costco membership, which means we buy a lot of things in bulk. Mostly paper items that won't go bad. Or alcohol. Or both. But sometimes we buy things like meat. Which brings us to this recipe. We had a bunch of hamburgers for this weekend. We had a huge garage sale for which my family came down to visit. We decided to grill for one of the nights. Because I panicked, I bought a crap-ton more hamburgers and brats than we needed. So much so, not only did we have to grill two nights in a row (no one was complaining though) but we had leftover hamburgers.

My dad suggested that my husband grills the remaining hamburgers. He said we could use it for things like chili or spaghetti. Plus, it would keep a little better than raw hamburger, which is our problem, we buy stuff in bulk from Costco and it ends up going bad. What a great suggestion to cook the meat and then use it in something else. One of my many talents is making a meal out of random stuff we have in our cupboards. That comes from being a poor and cheap college student turned debt-ridden single female working for a call center.

So, as a result, I decided to make spaghetti using leftover hamburgers from this weekend. 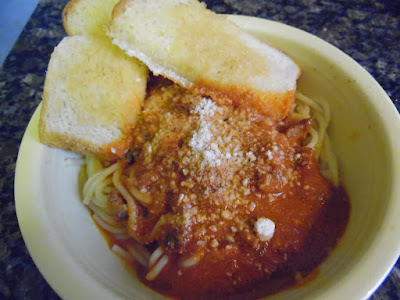 DISCLAIMER: This is how *I* made our spaghetti last night. I encourage you to change the proportions and/or ingredients to fit your tastes and amount of people you are feeding. Don't be afraid to play. That's how I am able to make such interesting and tasty treats. Also, the listing of ingredients are estimations. So I apologize if you end up with more spaghetti noodles than you wanted.

What you will need:
- 3 cooked hamburgers
- One jar of super cheap, normal spaghetti sauce
- Spaghetti noodles for how many people you want to serve. Use something like this to determine
- Basil
- Garlic (powdered  or minced, up to you)
- Oregano
- Minced Onion (or onion powder)
- Worcestershire sauce
- Salt (to taste)
- Parmesan Cheese
- Cheap white wine
- Greek Yogurt or Sour Cream
- Beef broth
- Spatz's Bread (or regular bread if you are not from Michigan)
- Butter


Start by boiling the water to cook the spaghetti.

While that's going on, cut up the hamburgers.

After that is done, add together the spaghetti sauce, Worcestershire sauce (just about a table spoon), basil, garlic, onion, a splash of the cheap white wine, and just about a half a cup of beef broth together in a bowl and mix. Then transfer to a sauce pot on medium heat. While heating up, add slowly a little Greek yogurt or sour cream to thicken. Also add a little Parmesan cheese. Like, two shakes.

When the water is done boiling, add the spaghetti noodles. I like to break them in half to make it more manageable, but to each their own. 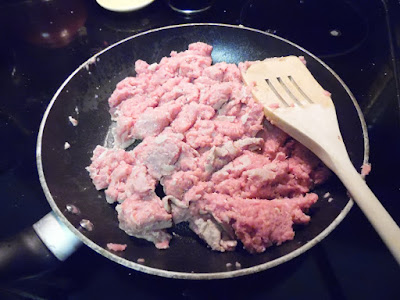 Break up and start to "cook" the hamburger in a frying pan. Since it is mostly cooked anyway, this will be pretty easy to do. You can season the meat a little bit with some more Worcestershire sauce and garlic. When completely cooked and warmed up, add to the sauce. 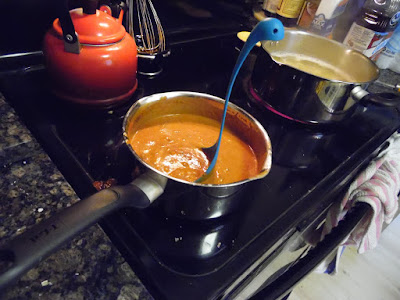 Watch out for Nessies in your sauce though....

While things are cooking together, put butter on the bread and sprinkle with garlic powder. Then put in a toaster oven or oven. 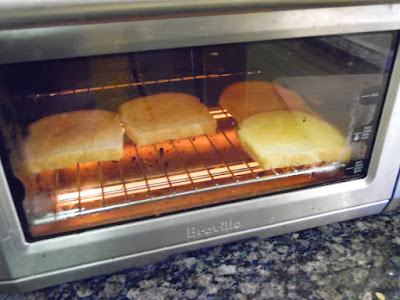 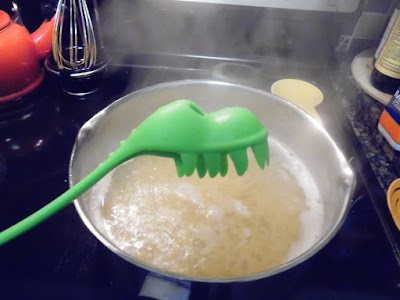 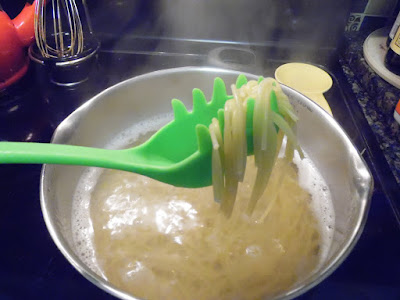 Once the spaghetti noodles are cooked, drain the water.

The sauce and the garlic bread should be all set to go.

Sprinkle some Parmesan on top. 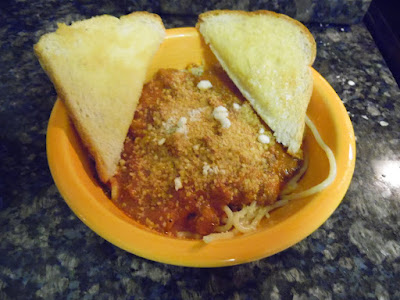