The CPKs in Chicago Day 3

Woke up to yet another gorgeous, sunny morning.

You see, what you may not know is I am a morning person.

Anywho, woke up, took our time, headed to coffee at a corner cafe just a block down from our hotel. That is where I updated the previous day's blog and drank my daily intake of caffeine. We then headed back to the hotel in which we got ready to head out for the day.


For lunch, we headed to The Signature Room in what was the John Hancock Building. The restaurant is on the 95th floor of this building, and yes, the view is just as spectacular as it sounds. 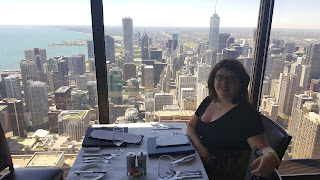 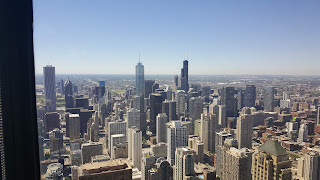 We had reservations, and we were the first to be seated for lunch, and I don't think we could have asked for a better table. 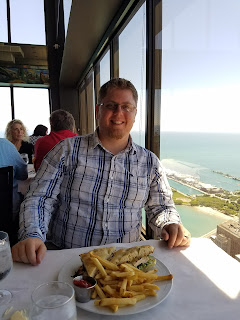 Our lunch was just as spectacular as the view. Since they had calamari as an appetizer option, we had calamari, naturally. Had to say I personally think that this calamari was some of the best I've ever had. Breaky had a chicken sandwich and I had truffle ravioli. Great, great food. 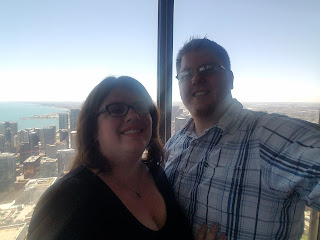 We had some time to kill, so we walked around the area, which ended up being the Magnificent Mile, which we will come back to later this week.

Our tickets for Aladdin the Musical were for the 2:00 pm, so we Uber-ed (is that a word yet?) with one of the worst we've had. He wasn't rude or anything, but dear baby deer, this guys was reckless. That, and we got stuck at a drawbridge for like, 15 minutes. Must note, this is where I re-learned that subtlety is not Breaky's strongest attribute.

Me, (noticing the time and the bridge isn't going up): **light elbow to the arm**

Breaky: "WHAT? WHAT DO YOU WANT ME TO DO"

Well, we made it anyway. With plenty of time. 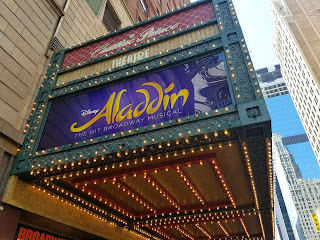 The rest of the evening was/is really chill. We headed to Lou Malnati's Pizzeria, which was literally just a block or so away from our hotel. We heard from several sources that was the place to go. It was delicious, and if we were here for like, a month, we may be able to try every single place people said had the best Chicago pizza. But we don't, and they had good pizza, so there you go. 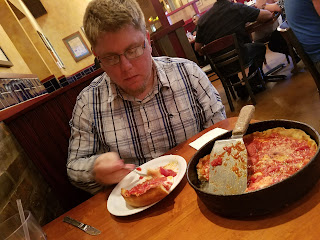 Tonight, as many of you know, is the game 3 of the NBA finals; Warriors vs the Cavaliers, (or as Breaky and Diva call it, the Lebrons) so we went to Bar Louis again for drinks and to watch the game. We lasted about half the game before I started to fade, plus, I was getting frustrated with the obvious band-wagon Golden State fans in the bar.

So now, here we are back in our room, splitting a pint of Ben & Jerry's watching the last few minutes of the game.

Not a horrible way to end a pretty darn good day.
Posted by DuchessCPK at 11:46:00 PM