The CPKs in Chicago Day 4

At the risk of sounding repetitive, we woke up to yet another gorgeous morning. We headed out to a late lunch to meet up with some friends of mine I know from high school/college who have been living in Chicago for quite a few years, so that was quite fun. We went to a place called Tweet, which is connected to a place that is a bar at night, which the names escapes me. 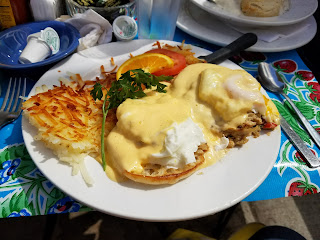 We debated about what to accomplish today during the rest of the morning and afternoon. We ended up at the Chicago Art Institute. I had been there before, but it was so much more than I remember. 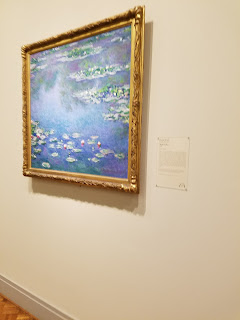 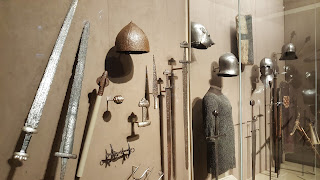 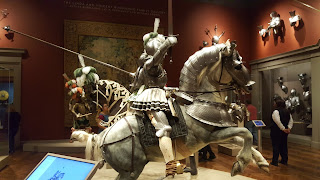 We saw the Thorne Miniatures, works from Monet, Manet, some ancient weapons and armor, and most impressively was A Sunday on La grande Jatte by George Seurat. 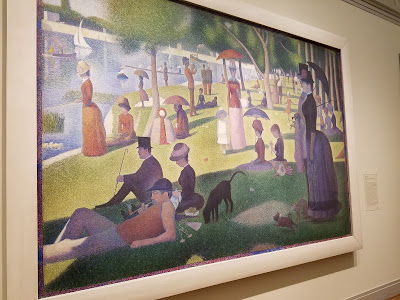 I always enjoyed the painting, I have a special connection through the musical "Sunday in the Park with George" which is a telling of the making of the painting featuring Mandy Patinkin and the lovely Bernadette Peters. Many know Mandy Patinkin as Inigo Montoya from Princess Bride, which is also a great movie, or Criminal Minds and Homeland. Here is Mandy from Sunday in the Park with George singing "Finishing the Hat"

**I will have you know as a result of looking up Sunday in the Park with George, I spent about 30 extra minutes going through Youtube videos of Mandy Patinkin singing,which included songs from the Secret Garden. If I don't stop now, I will not get this blog finished** 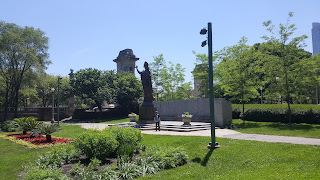 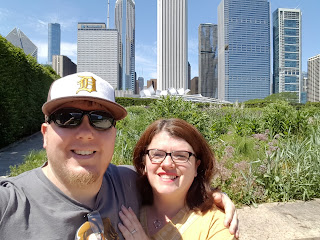 Once we say what we could there, we headed to Millennium Park and the surrounding parks and gardens, where we did some sight-seeing, ate some hot-dogs then decided it was a great idea to rollerblade in this designated area. Yes, you read that right, rollerblading. OH my God, I forgot how painful it is when you have flat feet. Don't get me wrong, it was fun. But holy moly. 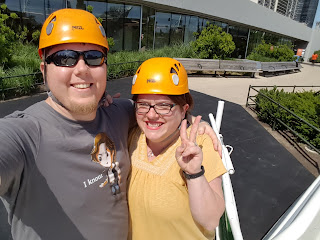 Down the way was a mini golf course. We kept score which with us is dangerous. "Officially" we tied, BUT, the question remaining is if it counts as one or two if he hit my ball in the hole after my first stroke. Isn't that a hole in one? I didn't touch it twice! 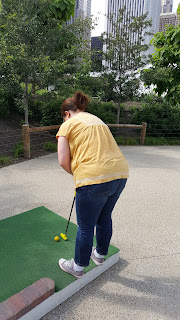 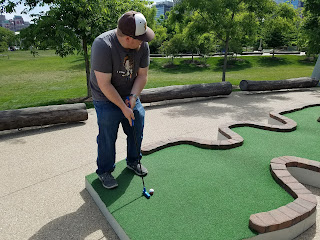 After that, we headed back to the hotel to change, because we headed to....

Took the train (which was a bit of an adventure in and of itself) to the famous Wrigley Field, and let me tell you, it was an experience we were so glad we could do. Our seats were just above field level, right where foul balls would be if they went just a little higher than normal. Breaky insisted on wearing his San Diego Padres jersey as well as his WMU Tiger's baseball cap. He got comments on both, but no one was rude or threatening. After all, it is just the Padres. :) 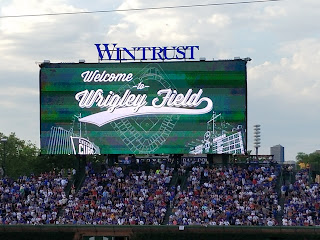 The stadium was obviously older, with a lot of character. Lots of green, of course, and throwbacks to classic baseball that you don't often find anymore. Mind you, I don't have a lot of experience with different baseball fields. The old Tiger's Stadium and the "new" Comerica Park" is about it. Obviously, we are Tigers fans first and foremost. I did buy a Cubs t-shirt to wear to the game. When in Rome, right? 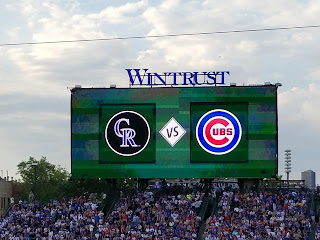 The Cubs played the Colorado Rockies, and unfortunately lost. We left at just around the 7th inning, for several reasons. We did not want to take the train, and the stadium was packed, so we figured if we wanted to catch an Uber that wasn't incredibly expensive, we should high-tail it outta there sooner than later. And we went to the game as an experience and not die-hard Cubs fans, so we accomplished what we wanted to. 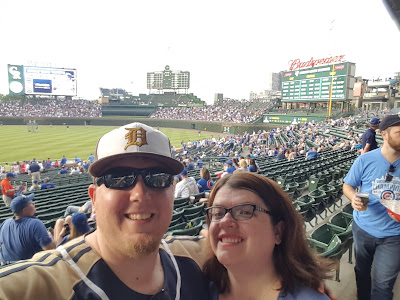 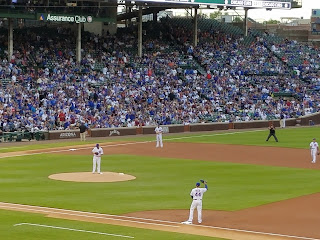 The Uber we took after the game was a hoot. Had great conversations, got us back to the hotel with tons of time to spend. We talked about everything from Ohio State to football to basketball. No worries, despite him being from Ohio, he doesn't like Ohio State, so we could get along. He also gave free candy, which now sounds really creepy, but at the time was really clever. Honestly though, had the car ride been any longer, the amount of talking may have become tedious, but for the 20 minutes it took, it was a welcome distraction. Still one of the bets Ubers we've had in Chicago.