The CPKs in Chicago Day 2

We woke up way earlier than intended. Two reasons, one, we forgot to close the curtains all the way and dang does it get bright early here. And two, we are an hour off, so 8 here is 9 back home. 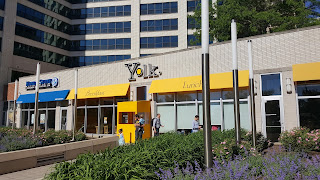 Upon a recommendation, again, from the concierge, we headed to a breakfast and lunch place called Yolk just a block or two down from our hotel. It was so super good. So far the best meal we both have had while in Chicago, which is saying something. 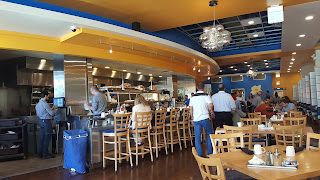 I had Eggs Benedict with salmon. Yes, salmon. I never serve salmon anymore, as Breaky and half of my immediate family do not like it. So that was a little unexpected treat. Breaky got a breakfast wrap. Fantastic coffee, fun atmosphere, would definitely recommend. 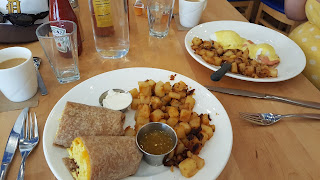 From there we hiked to the Shedd Aquarium, as a part of the City Pass we had purchased. I do not know if it was just a busy day for school groups, or during the week is always bad, or if it is always this packed, but oh....my....God, so many kids. 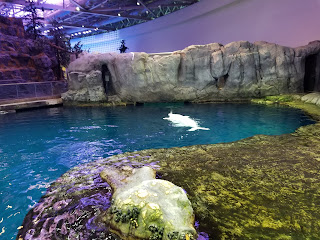 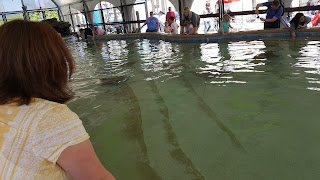 Despite the swirling masses of mini devils, we did have a lot of fun. We touched sting rays, saw Beluga Whales, saw a myriad of sea, lake and river creatures, including, believe iit or not, bluegills, which, when I mentioned out loud that I have caught more bluegills fishing than any other fish in existence, this woman turned around and said, oh my God, me too! It was a moment. 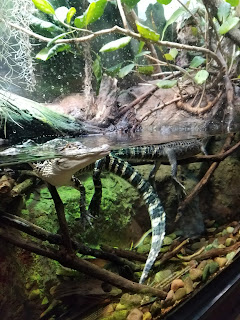 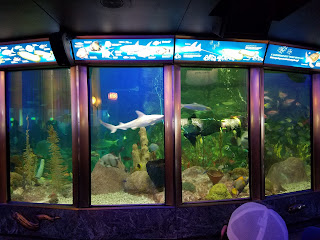 We wrapped up the Shedd experience with a 4D adventure. We saw Sea Monsters: A Prehistoric Adventure. A 4D movie, evidently means on top of the actual movie being in 3D, your seat rumbles, wind is blown around your face, you get sprayed by misty water, poked in the back, and have little cord things whip around your ankles. While that sounds like torture to some, it actually was really well done. I did feel kind of bad, there were some kids that were waaay too young to be in there, and started freaking out and crying. Come on parents, the movie was "Sea Monsters" not "cuddly little harmless bunnies" or something. I do not think your 3 year old is going to do well with a 3 million year old monstrosity biting out at the audience in 3D, let alone all these other things happening around them. But you know what, none of my business. But really, I did enjoy the movie. Very entertaining and educational. 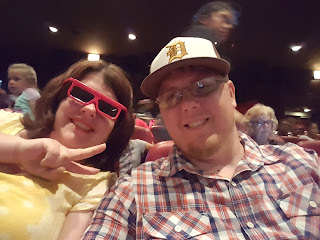 We then headed out of the aquarium and boarded a water taxi to take us to Navy Pier. Last time we took a water taxi/shuttle was when we went on our honeymoon in Mackinac Island. This was pretty similar, although didn't hit the speeds like we did last time. 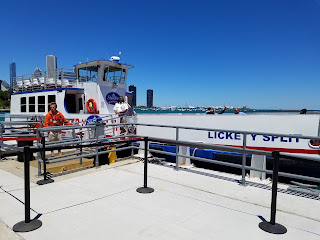 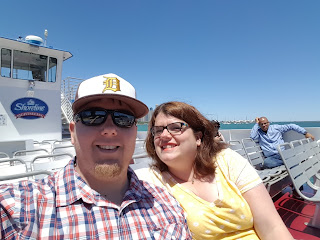 At the Navy Pier, we grabbed a hot dog, walked around a bit, took pictures. Basically did the touristy thing. Breaky vetoed the Ferris Wheel, which is fine with me, I've already been on it. We have plans that will take us to breathtaking views of the city anyway, so overall I wasn't that disappointed. 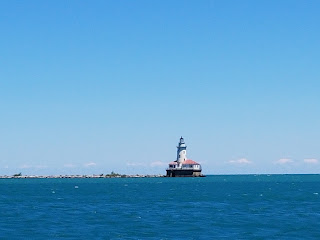 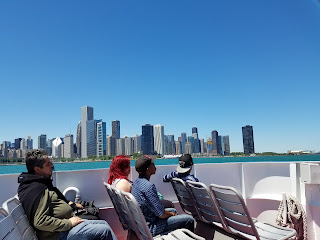 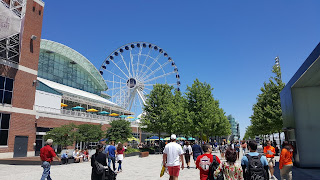 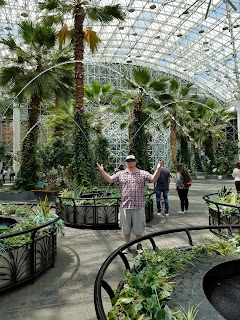 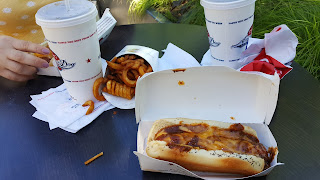 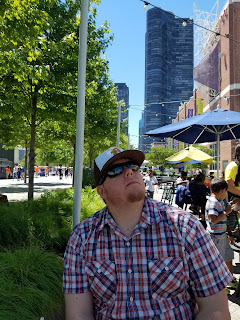 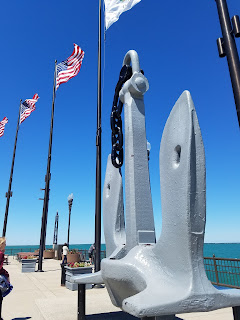 We debated all day about how to get back to the hotel after Navy Pier. I insisted it was walk-able, and that we didn't have to waste money on either the water taxi back to the museums, which were within walking distance of our hotel, or an Uber. Breaky looked up on the GPS, and sure enough, just about 2.5 miles away. We can totally do that. You want to know how you can tell we did? I now have a nice llittle sun burn on my chest, despite sunscreen application earlier in the morning. But in all seriousness, the walk wasn't really that bad. 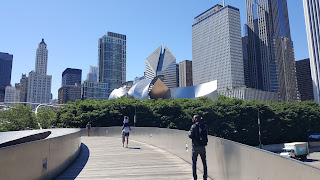 For dinner, we headed to a restaurant called the Pump Room. The reason we went there was because that is where my grandparents on my Mom's side had their first date. At the time, they couldn't afford to actually have a meal there, so they ordered a drink and sat outside for a good hour or so. 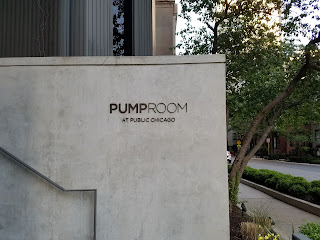 So we take an Uber, which is becoming our main source of transportation as, since we don't care if we share a ride with others, is insanely inexpensive. 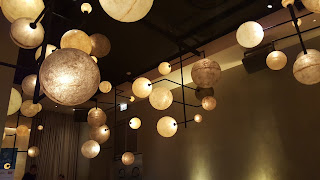 We arrive at the Pump Room, and this is fancy. I am talking like, pushing my chair in for me fancy. I start asking questions about where this "outside" bit would be that my grandparents would have sat, and I guess it would have been upstairs on the roof. Nifty! Also found out that much of the original Pump Room has been auctioned off about 5 years, all except the chandelier in the hallway. 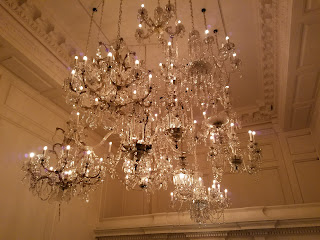 Breaky and I had what was probably one of the top 5 meals of our lifetime. For drinks, I got a cucumber martini, and Breaky had a Stella. For appetizer, we had calamari, which is tradition! For the main course,  Breaky had filet mignon with white asparagus and mashed potatoes and I had red snapper with a brown gravy sauce mushrooms and vegetables. 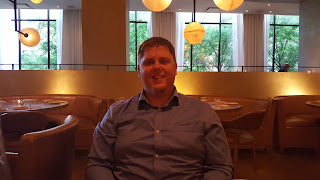 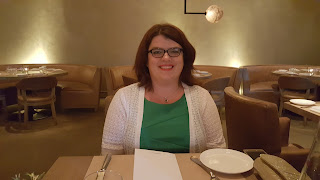 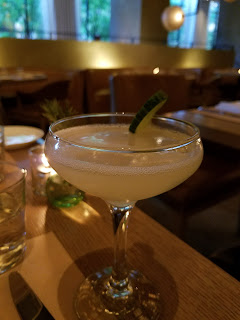 When we were explaining the connection to the Pump Room and my grandparents, I had mentioned that we were in Chicago celebrating our 2 year anniversary. This is true, although our actual anniversary isn't until later June, the intention of this trip was to spend time together and celebrate my birthday and our anniversary. Our waiter went well above and beyond! As a result of our anniversary, we got complimentary bubbly, and a dessert! Both were to die for. 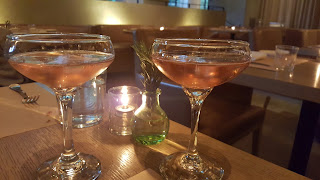 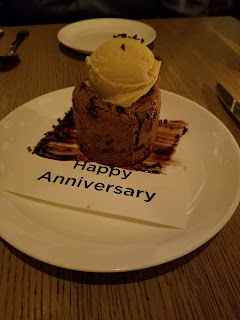 We ended up ordering another round of drinks before departing, as neither of us were driving or even walking back to the hotel. Grabbed another Uber back, headed upstairs and legitimately crashed. Which is why this blog post is getting posted a little later than the previous one. Sorry, kinda....not sorry.