TBT with Wreck it Ralph

What a great day to find out about Wreck it Ralph 2 . It is Thursday, which means I can post a "Throwback Thursday" without having to fudge what day it actually is. Because it is a Thursday. Not a Monday or Wednesday. Hey, don't judge me, after some work days it is really hard to know what day it is, where I am and what the heck I am supposed to do. Adulting.

For Halloween 2014, our first Halloween in our new house, Breaky and I decided to be Ralph and Vanellope from Wreck it Ralph. As you can kinda tell, our costumes were thrown together by a bunch of stuff, including a wig that a bunch of the S2 guys used during a cast of HoN. Everything else we either got from Amazon, Etsy or Meijer. If there is interest, I can outline where I got what. 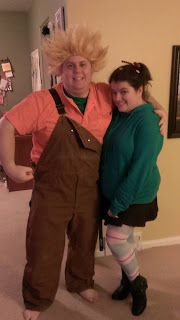 Obviously, we both really liked the movie. Old-school nostalgia of video games we both played, compounded by some great animation, a fantastic story-line and an even better message. Not to mention the wonderful voice talents of the likes of John C. Reily, Sarah Silverman, Jane Lynch, and the dearest Alan Tudyk.

A while ago we heard they were making a second movie. Normally, any time I see a sequel or a remake of a really good movie, I groan. Mostly because the remake is so bad it tarnishes the original, or it strays so far from the original, it really is a completely different movie with the same title. Or the sequel was only made for the $$$ and is sub-par, but still rakes in money because of the brand recognition. There are obvious exceptions, which I would love to hear in the comments below!

BUT, in this case, when we heard there was a Ralph 2, I was actually excited. Since it has been 5 years since the original, I figured that it wasn't simply a money grab, as if that were to have happened, it would have happened within a few years of the original movie.

So imagine how much more amped up my excitement got that, as a primarily PC gamer, the title of Wreck it Ralph came out: "Ralph Breaks the Internet" 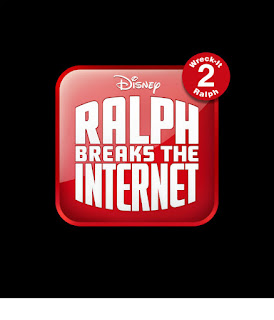 Whaaaaaaaat? Obviously a jab at that one "celebrity" who's "viral" campaign was set to "break the internet" (now, reread that sentence, and imagine me doing air-quotes and the words dripping with sarcastic disdain).

Besides that, it obviously means that more PC/Console will probably make appearances. Which, honestly is pretty cool. As long as they put the same amount of detail and little "easter eggs" like they did the previous movie. Heck, if you have like, an hour to kill, go to IMDB's page for Wreck it Ralph and check out the trivia section. I found out I missed a bunch of hidden shout-outs. Kinda makes you want to watch the movie again, doesn't it?

Is anyone else excited for this movie? Especially now that you have the title? Anyone apprehensive? Say so in the comments. Also, let me know what remakes and sequels don't suck. Maybe it will change my outlook on sequels and remakes that have run rampant nowadays.