The World is Nucking Futs. A monologue from someone who copes by distractions.

As many of you know, this world is fucking crazy.  Things are heavy and morbid and made worse, not better, by politics and disagreements.

Kalamazoo, MI, where Breaky and I live, has had its fair share of inexplicable loss this past year. First, we had an Uber driver shoot people around the city, killing 6 and injuring 2. Then we had a man run over a group of bikers with his truck, killing 5 and injuring 4.

That, compounded with local news, I am terrified to open my phone to see what international city was the next target of a shooting, a bombing, or what ever new way evil people have come up with to end the lives of innocent people they have never met. I cannot, and refuse to try to fathom how much hate it would take to be so completely blind to believe wholeheartedly that the illogic death of innocent people is the only way to go. My heart breaks a little every time I read about any death, be it by intentional hands, accidental or otherwise. This is because I am, by nature, a compassionate person. I would not have it any other way. I never want to wake up and hear, yet again, tragic news and not care. To not have my heart break at the announcement of innocent lives lost would mean my humanity and compassion is gone, That scares me more than anything.

How do we survive? Some people endure by fighting. With riots, or petitions, or a bombardment of Facebook posts. Some people cope by finding other things to occupy their time, like video games, or reading, or simply escaping in to a new world by watching unrelated T.V. Others take the light hearted approach and distract people with humor and jokes, making people laugh and smile. 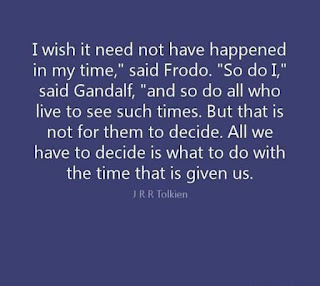 I am one who copes by finding other things to do and occupy my mind. Did so when I found out about 9/11. Found out about during 2nd hour of my Freshman year of high school. Obviously, school still happened, and people wanted to talk about it. Some made some jokes, because that was the only way people knew how to cope. By the time I got home, I was an emotional teenage wreck, and wanted nothing to do but go downstairs and watch some T.V. But wouldn't you know, all the channels had coverage of the event or weren't broadcasting at all. I went upstairs to tell my parents and ended up losing it. Just broke down crying. It was too much to care about all those thousands and thousands of people and to realize that someone (multiple someones) did this on purpose.

Same with the events today. People wonder why video games, augmented reality and other delicious forms of distraction are so appealing now a days. It is because the world is a fucking scary place now. People hating other people for reasons that still do not justify homicide of any kind. My heart and head would not be in one piece if I did not have distractions like gaming, or my dog, or my house projects.

I don't post about it, I don't routinely blog about it. I will have an intelligent conversation about it if it comes up, but it is not my favorite pastime. This does not mean I don't know what's going on, and it doesn't mean I do not care.

People have different ways of dealing with tradgedy and conflict on a national and international level.

I chose to catch Pokemon in an augmented reality or heal my teammates in Overwatch. I chose to snuggle with my dog and be amazed at how soft her ears are and how proud I am when the training we've been working on sticks. I chose to, in silent moments on a late Saturday morning to appreciate my husband, who is on his side snoring, by gently rubbing his back and shoulders, thinking about how he is the best thing that has ever happened to me and how much I love him. I chose to throw myself in to my work, helping people continue their education. I chose to write about gaming and nerdy things because it makes me smile and I would like to think others like it too.  This isn't wrong just because it isn't what you would do, or someone else would do. It is my coping mechanism. Embrace your own, you do not need to explain yourself.

Nice matters. Be good to each other, people.