For those uninitiated, Pokemon Go is a free-to-play mobile game that allows players to capture, battle, train and trade Pokemon in the "real world" in an "augmented reality." Meaning, you have to walk around neighborhoods and your area to get Pokemon, Pokeballs, eggs, etc....

Honestly, I had no idea this was even coming out until I saw a bunch of stuff on Reddit about it. Then I came home and Breaky had downloaded it and was playing. So of course we went for a walk and he was showing me how it worked and what he was catching and all that fun stuff. He also got a picture of one of the Pokeballs and DogCPK: 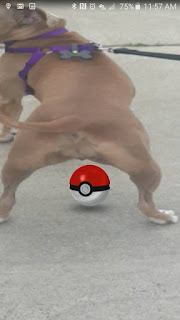 But then I listened to the news about all these horrible things happening to those who were playing it, like people walking in to the street and getting hit by cars, or getting robbed for their phones because they walked in to the wrong neighborhood. The media has also spun this so for every pro-Pokemon Go post I see on Facebook, it is followed up by a negative post by a curmudgeon griping about how prowlers and thieves will use this as an excuse for being outside your house, and how kids should be at libraries instead of playing video games or how now parks are too crowded and everything is the end of the world. (Side gripe: you cannot complain about how your problem with video games is that it makes kids fat and lazy because they are sitting inside all day and then turn around and bitch because now they are playing video games outside and getting exercise. GRRR).

But I also saw how much fun everyone else was having with it and the local Pokemon Go Facebook group Breaky had organized. I was torn. I also use Fitbit, and this would be great to get my 10,000 steps in a day! So I asked my Facebook followers if I should play or not.

It was a resounding "yes!" which made me realize that maybe I was being sucked in to the media machine that simply spit out the negative to get viewers to listen or to click and giving the Facebook drama fire more fuel.


So I downloaded it.


I am close to level 5 and have caught a bunch of Pokemon on my walk to and from work, which passes by 3 checkpoints, including one in front of my work place. DogCPK loves it because all of the sudden she is going on so many more walks with both of us and she gets to stop and sniff everything while Breaky tries to catch the 232th Rattata (omg I think I spelled that right on the first try!) 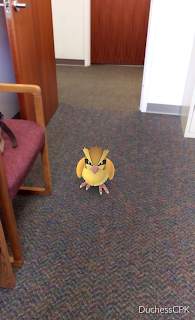 I came up with several points and suggestions that would allow me and hopefully others to enjoy the game while being safe and courteous. This is from a perspective of someone who watched people play and listened to the media.

1. Always be aware of our surroundings. You may have heard about some of the more dire things from the media I had mentioned above. Where there are good, fun, normal people, you will have ill-intentioned jerk-face people. Balance is needed, but that doesn't make it any easier. Be cautious, but still remember to be appropriately friendly. Do not be a jerk.

2. Being outside means we are increasing our chances of experiencing life in its uniqueness. Read about the teen that found the dead body? Usually those kinds of discoveries are left for joggers and hikers, not gamers. But now that we are out and about, realize that life and the outdoors is full of surprises and real-life drama and heartbreak. Maybe someone finds a dead body, but maybe you find a 20 dollar bill!

3. Do not drive and play Pokemon Go. I REPEAT DO NOT DRIVE AND PLAY POKEMON GO. Similar to driving and texting, it just is not worth it. I don't have many "rules" when it comes to my relationships. But I will throw your damn phone out the window if you are driving and trying to do anything with your phone. Please just wait until you are safely parked, then walk around to those checkpoints and Pokemon. Meeting people while walking is a lot better than meeting the undertaker.

4. We need to watch where we are going and be courteous to people's privacy and property. We do not need the media outlets and people my parents' age to have more ammunition about our generation being zombies buried in our phones as it was the end of the world. Enjoy your walk. Take those pictures of the Pokemon in weird places. Just please look up more than you are looking at your phone. Also, if there is a Pokemon in someone's private property, either get permission to be there, or just keep walking. I do not care if it is the most rare one in the world. I don't need more of my former teachers griping about how "kids need to stay off their lawn".  We can't win. I don't want to hear about it. Be smart. Oh, and do not walk in to traffic. Seems like silly advice, but I, on several occasions will look up from my phone and be a lot further along than I thought I was. Didn't run in to traffic, but it could have happened.

5. We probably shouldn't play during work (depending on where you work). Please be aware that your employer may not want to pay you to catch Pokemon in an augmented reality. If you are not exactly sure if your employer is cool with it, chances are they are not. Save it for breaks and lunches. Walking lunches are the best anyway! 6. Don't get discouraged. Have fun!  All the negative news, disclaimers about safety, rude comments, scary stories and just plain bad media coverage shouldn't deter us from enjoying ourselves. I often feel personal shame and guilt if a gaming community I am a part of gets negative media attention because of one or two trolls or a bad decision or two. Let us not let a few bad stories ruin it for everyone else. Let's make this gaming experience great for everyone!