My Journey Into Azeroth Part 1

Whispers to husband: It's Azeroth, right? Do I have that right? That's not the name of the place we started though. Azeroth is the "big picture" place yes?

So, that will give you an insight in to how my journey in to playing Blizzard's World of Warcraft. I will break it up in to different parts, so hold on to your hats, we are going on an adventure!

DISCLAIMER: I am no expert in World of Warcraft (WoW). This is written from a "noob" perspective. I will call things the wrong name. I will make assumptions that are wrong. It is meant to be a good read.

To give you a little insight, I am mostly a first-person shooter game kind of gal. I do thoroughly enjoy Hearthstone though, so many characters and items/objects I recognize.

So one night, after years and years of pestering, I finally got a trial version of World of Warcraft. Why you ask? Well Hearthstone was running a promotion that if you reach level 20 on a new character in World of Warcraft, you get a new hero in Hearthstone: Lady Liadrin, a paladin.

I have a mediocre Murloc Paladin deck. Not necessarily the level of my Dragon Priest deck, but it was reason enough to dip my toe in the waters of WoW. 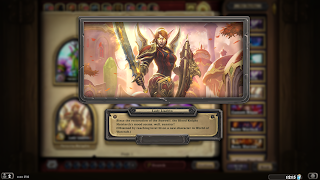 So for weird reasons, I folded. Told my husband I wanted to try it out.

Logging in, we had some connectivity issues, which we will find out why later. Once logged in, we decided to go with Night Elf for our ..... race (asks husband...it's race right?), yes race. I decided to be a Priest class. Meaning I do the healing and damage stuff from a distance. Plus, got to rep my priest and stay consistent across most Blizzard games as a healer (I play Mercy in Overwatch).

Now this does mean my husband is playing as Alliance instead of Horde, which, considering he wanted to burn an Alliance shirt I owned when we first started dating, is a big frickin deal. 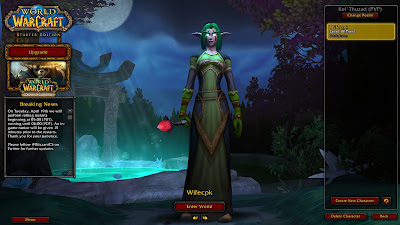 So we started. Since there is no tutorial, but instead hints and help as you start, I relied pretty heavily on my husband to fill me in on how to play. First and foremost how the hell to make my character move. Clicking, right clicking, left clicking etc... on top of the usual up, down left, right key bindings. I found myself often getting stuck because I couldn't figure out how to adjust my view and making my character do what I need her to.

First impression? A crap ton of things going on. Lots of things to read, if you want to follow any kind of story line or get history/lore. Since Breaky has done this already, it was kind of go-go-go. Often times I had to be like, "Hakuna your Ta-Tas dear". I want to read why we have to pick these flowers to get experience. Although, in that "quest" I did figure out that we can swim! Which, I must confess, I did for a good few minutes. It was just fun. I think on that quest I lost my husband having too much fun swimming.

I found that my biggest challenge once conquering the whole getting my character to move the right way, was binding spells and items accordingly. There just seemed like there was soooo much to read and consider and little time to do it. How was I supposed to know I can't use leather and plate? If my husband wasn't around, I would be picking up everything and be completely lost. Where is it said that it was a leather object? Do I need stamina? What's the difference between stamina and intelligence? The learning curve is intense. Or we went through everything far too quickly, which is possible. Actually attaching things to me (I believe the word is "bind" it to me, but I could be wrong) took me a long time, because I'm the kind of gal that wanted to sit and read and figure out what would be best, strategically. Look below, those are so many things I don't know what they do.

(NOT MY BAG! Picture from the internet)

Visually, the artwork and the characters, the landscape, the animals, etc... were all very well created and appealing. Lots of fun to take a look at all the different artwork representing the different mechanics.

I finally got the basics and Breaky and I did a great job of working together. Eventually. In the beginning, I would get annoyed when I wanted to kill something and he jumped in and did it for me. Mind you, we were on the same "team" or what ever, but I wanted to learn dammit! Anyway, we did find, however, that because of the promotion (we believe), there were WAY too many other people where we were. Everyone trying to level a new character super quick to get the Hearthstone promotion (again, we speculate. It's not like we asked anyone). We would get to where we had to defeat someone and there would be like, 4 people waiting to do the same thing. Because this is the internet, it wasn't exactly like they were going to wait in line according to who got there first. So that was fun. Honestly, it had more to do with me still figuring out how to target people and missing than it did with the amount of traffic for that one quest.

The next step was going to another location. We flew on hippogriffs -PS, why did auto-correct want to change it from hippogriffs to hippodromes? What is a hippodrome anyway?

I couldn't tell you where we flew to, but the view was stunning. Such detail to the landscape. We did a few more quests, which usually involved me being about 10 paces behind my husband, healing him and doing some damage from afar. Fine. With. Me.

My takeaways: 1. The art and the landscape and the characters were all very well created and visually appealing. 2. The actual play took some getting used to and sometimes caused me some frustration. 3. thus-far was playable and fun when we weren't waiting for other people (who have obviously played a ton already) to do what we were trying to do. 4. I am no expert in what certain things are called and we should have written down some of my attempts to communicate with Breaky what I was trying to say. It was hilarious, I'm sure.

Part 2 will be about my travels into "Dungeons" which, from my experience thus far are "caves" not dungeons. And yes, I'm being pedantic. Sue me. Well, don't *actually* sue me. I don't have money.

Till next time! FOR THE ALLIANCE!