Empowerment: The Women Who Came Before Me, Who Stand Beside Me and Who Shape the Future After Me

The whole "Your Word of the Year" was popular this year during the new year. 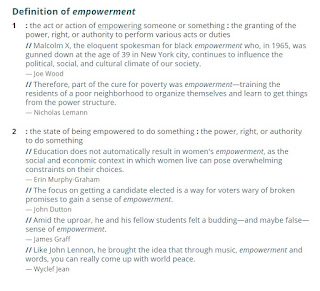 Now,a s you can tell from the definition above, it can mean to either empower someone or the state of being empowered to do something.

I fell in love with this concept and it became my word of the year. I believe in empowering others. There is nothing more important than to lift each other up. But that does not mean you need to forget about yourself. I need to realize I have the power and authority to do all the things I want to and need to. As a mother, as a wife, as a professional, as a family member and as a friend.

On this International Women's Day, I choose to appreciate all the women in my life, past and present, who have given me the power to be, without apology, who I am today.

Growing up, I had a plethora of female role models to look up to. I didn't have to look far, as many were in my family. A Mother, two grandmothers, and four aunts.

I have women who came before me to help shape who I am today:

My mother, who is the biggest Detroit Tigers fan you will find, defied misogyny and forced gender roles her entire life. The sister of two brothers, she was a natural tom-boy, playing with the boys in the neighborhood, and forwent the frilly dresses her mother would have preferred her to be in all the time. She was a swim champion, who eventually became the Director of Women's Athletic Activities, and after I was born had several other positions, and is currently the manager of a doctor's office. Growing up, Mom was the one who mowed the lawn, grilled the hamburgers and steaks, and loved Detroit sports more than anyone I know, particularly the Tigers and the Lions. She kicked the soccer ball around with my sister and me, and practiced our throwing, pitching and catching in the backyard. She was the backbone and manager of my dad's choir performances, making sure ticket orders were processed, parent volunteers were kept in check and busy, money was handled with care. She was and is one of the hardest workers I know. She is also one of the most caring, generous, sensitive and loving mother and now grandmother anyone could ask for. I am so thrilled that BabyCPK also has a wonderful role model to look up to. 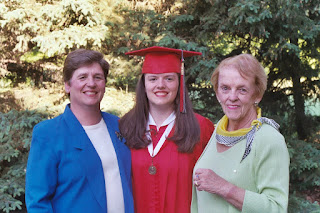 My mother, me and my grandmother on my graduation day

My one grandmother passed before I was 8, so I regret not getting to know her better. My mom's mom however, lived until 2012, the year I met Breaky. That grandmother found herself a widow with 3 young children when my mother was 11. She raised two boys and my mom and had to become self-sufficient. She was outspoken, opinionated where it counted, and could work social circles so effectively that it could make your head spin. When she was older, she threw herself in to many volunteer opportunities. So much so, that she often had to consult her calendar to make time to see her grandchildren, which she always willingly did. She adored her family. She loved her children, her children-in-law, her daughter inlaw-inlaw as she called my fraternal aunt, her five grandchildren and we know she would have loved her great-grandchild.

This blog post would be impossibly long if I went through all the numerous accomplishments of the rest of my wonderful female relatives. I did pay homage to the aunt we lost in November, so imagine if I tried to include all female relatives in my life! This blog post would take years to read. But I am related to women who owned their own businesses, served on school boards, were and are teachers, volunteers, mothers, grandmothers, aunts, and so, so much more.

Today, I have women who stand beside me and continue to help build me up to a better person:

My sister is amazing. She is my best friend and confidant. She and I learned a lot from each other growing up. We made mistakes together, we fought, we laughed, we grew as individuals and eventually grew into strong women who had a great relationship with their sister. She and I even lived together for a few years after I got done with college. We didn't kill each other either! That's saying something. She is now a teacher and has my utmost respect, because being a teacher is something I could not do, as I simply do not have the patience, skill set and general amazingness it takes to do that job. I know she works tirelessly, and often thanklessly, every single day to make a difference in "her kids" lives. On this International Women's Day, I know she is unconsciously making a difference in a little girl's life that will make a lasting difference. 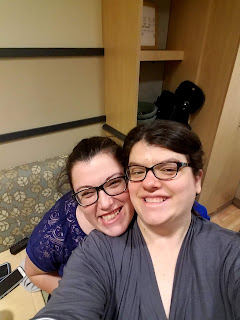 My sister and me hours after BabyCPK was born. She braided my hair and at the time it was the nicest thing anyone had every done for me in the history of ever. (I was still in pain and reaaaalllly tired and gross ok?) Perfect example of building others up.


I have worked with many individuals. In a recently previous position, I had a mentor, a woman, who instead of helping me be a better professional, sabotaged my career in that institution. I do not hate her, nor do I hold any ill-will. Because of her, I have found a job I am good at and will continue to strive in. It does, however, show the importance of sticking together and building others up instead of tearing them down. My current coworker and I have been through so much. Many leadership changes, physical location changes, personal meltdowns, office politics. And we are still here. She helps me as a professional and as a person every single day. I tell her every chance I get that she is one of the reasons I enjoy working where I do, doing what I do every day.

I married in to another family of strong, wonderful women. My sister in law has three absolutely amazing children, with one on the way, runs a ranch and a plethora of other jobs associated with the ranching business. Just hearing what she has on her plate makes me tired, but also extremely proud. My mother in law has a drive to travel that makes any adventurer jealous, and is a caring and creative spirit who follows her passions. She does pottery and makes amazing works of art, can sew a doll for her grandchildren in minutes, and is constantly surprising us with her next adventure in crafting.

I recently did a post regarding female streamers. I am empowered daily by their attitudes and tenacity to follow their passion in the way that works best for them.

I have friends that have shaped and continue to shape who I am. Similar to my female relatives, this blog post would probably break Blogger due to how long the post would be. I have so many female friends who have meant the world to me: college roommates who became best friends, former coworkers who became friends, my "pocket mom friends", and so many more.


And of course, there is the next generation of women who will shape the future that the women of today helped build the base for.

Last year, I wrote a letter to my week-old daughter about my feelings about her as a woman growing up in the world today. I still feel the same way. I am encouraged by how many strong female role models she has, and so extremely excited to see her shape her own future and become a female who is empowered and empowers others. 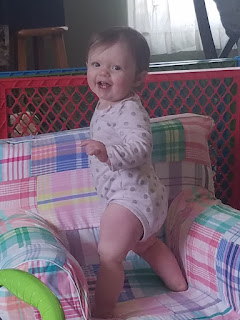