Thank you for the idea The Bloggess!

I got the idea from another blog, using this new (to me) "That can be my next tweet", which you supply your Twitter handle, and it gives you new tweets based on previous tweets. I was expecting some fun results.  Evidently, this system just takes snippets of your tweets and puts them together randomly, which.....well......um.....

The Bloggess's were funny. Mine..... Oh dear God, if my tweets ever read like this, please know I am being held against my will and I am reaching out for help. It worries me a little that they turned out like this.  I blame my Dad (English teacher) for instilling this "Variety of Sentence Beginnings" or VOSB theory in my cranium. It means my sentence structure varies ALL THE TIME, evidently even on Twitter. This program does not appreciate that formula evidently 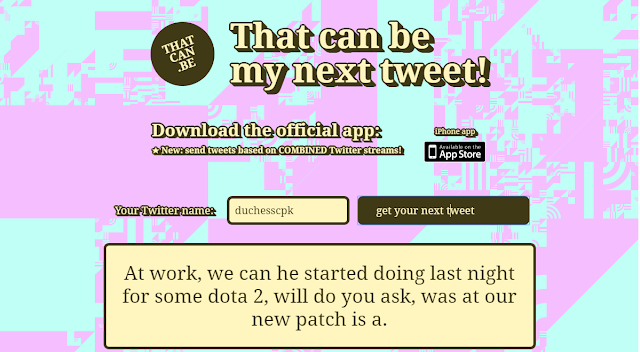 Whut. Our new patch is a what?! Do not leave me hanging.

So is the exterminator a leaf or a game? Or is the leaf the game? The second sentence reads like a punk-rock emo lyric.

I. Just I. And what did we do to female casters? Obviously no context.

This one is probably my favorite. Mostly for the random Detroit Lions ending. (BTW, that touchdown was amazing. Still miss Calvin Johnson though. )


And this is when I decided to stop:

STOP. STOP. WHAT? NOOOOooo no no no no.

Ok. I didn't actually "stop" as I was morbidly curious as to what other nonsensical blubbery would randomly appear if I hit that button again... and again.

So I decided, unless it was in regards to more death *cringe*, I would post the next one to Twitter. Because no one actually follows me on Twitter. This was the result:

We will see how many people figure out it was an automatically generated tweet from the link provided, and how many people will be concerned enough to call my mother to see if I have been committed. Or kidnapped.

My husband's cookies for casting was pretty funny though. Have to admit.