We Were Louder Than the DJ

So, buried in my little blog a month ago was a blurb about how Breaky and I were going to go to a Billy Talent concert in little ol' Kalamazoo and how much their music means to me.

Well, it happened, ladies and gents. Billy Talent came to Kalamazoo, or "Kzoo" if you will.

Got to see my roommate from my freshman year of college. Hadn't seen her in 9 years. 9. Years. We picked up where we left off, and it was like neither of us had aged a day. (I'm 30 years old, so this is a big deal, ok?)

The venue is not the largest venue in the surrounding Kalamazoo area. Which made it all the more amazing. To tell you how chill everything was, I have to tell a little story.

So, we are standing in line to get in. Perhaps a little early? Maybe. We were in the front-ish of the line, and chit-chatting, taking selfies, Breaky watching football on his phone every 5 minutes or so, Jessy and I reminiscing about live in our little dorm room freshman year. An individual in the parking lot caught my eye, and my heart skipped a beat. The lead singer, Ben Kowalewicz (I had to look up how to spell his last name and still had to fix it three times...) was just strolling in the parking lot. Jessy turned around, caught his eye, and in a sort of out-of-body experience, just waved to him. She said later it was the only thing she could think of. He waved back, smiled and said "hey guys" because by that point, everyone else in our group waved back.Super chill. Casual. Like it was no big deal. It was a pretty big deal to us, especially Jessy, who has been a fan for like, 15 years.

As I mentioned before, the venue was relatively small, but it was also outside. It was an absolutely gorgeous night. 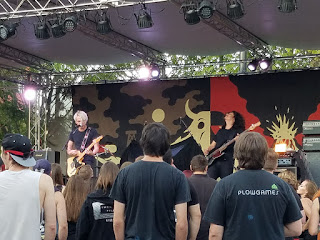 Picture of one of the opening bands!

They had two opening bands, both of whom were pretty good. We chilled in a few seats by the merch table with a few drinks. By the time Billy Talent came on, we were still able to get relatively close to the stage, but not too close to get engulfed in the mini-mosh pit that formed for a few seconds during a few songs. 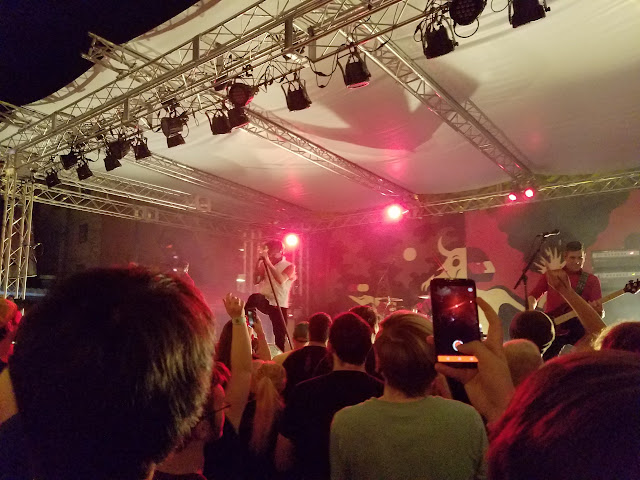 The band played some songs from their new album, which I love by the way, check it out if you haven't, specifically (that I can remember): "Afraid of Heights", "Louder than the DJ"and  "Ghost Ship of Cannibal Rats." I have to admit, when Ben started talking about a particular "ship" I think I was the only one who lost their minds, because honestly I really like that song... so I started screaming, only to realize it was pretty darn quiet...

But on top of the new stuff, they did a really good job of hyping the crowd with some older favorites. They did a great job of engaging the crowd, I think. Or maybe I was the only one bouncing around like an idiot, screaming at the top of my lungs with my fist in the air for the entire set. Hell, either way, I had a good time. Breaky may be considering a trail separation just to get some distance between him and this crazy lady who almost hit a few people with her clutch purse during a Billy Talent concert, but I had fun. That's what matters. That's also what is nice about getting older. You care less and less about what other people think of you and you do you. Me? I rocked my little heart out. 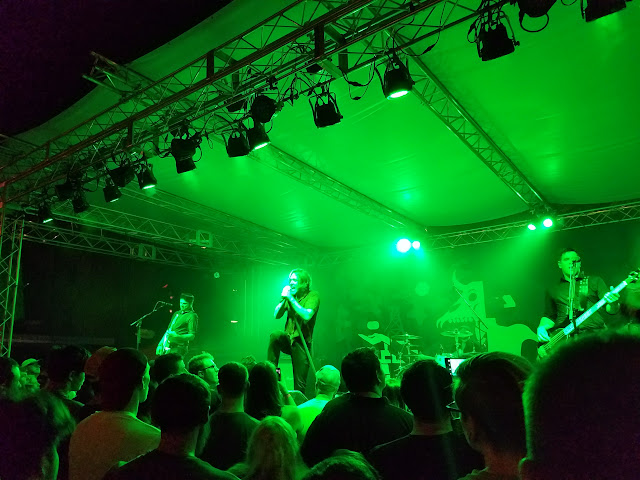 The set ended, and we noticed the band went in to the back, where the entrance to Wild Bull was. Hoping they may do some autograph signing, we stuck around for like, 2 minutes, checked Will Bull just for fun, then Jessy and her friend (who is also a Jessica!) had to get back to the east side of the state, and Breaky and I needed to get home to DogCPK, because we had left for a late lunch/early dinner around 3.

So while I had purchased a few things in the off-chance I may get an autograph, we were unsuccessful in obtaining any. But if that meant that the band got to enjoy more of Kalamazoo, I'm pretty cool with it.

My ears have resumed natural function, and I still have a voice. I'd say an overall success. Thank you to Billy Talent for visiting Kalamazoo and putting on a great show.
Posted by DuchessCPK at 12:30:00 PM